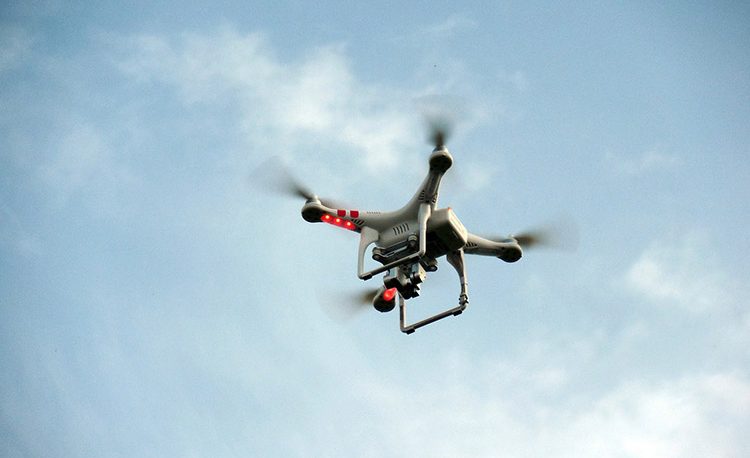 An unmanned aerial vehicle (UAV), commonly known as a drone, as an unmanned aircraft system (UAS), or by several other names, is an aircraft without a human pilot aboard. The flight of UAVs may operate with various degrees of autonomy: either under remote control by a human operator, or fully or intermittently autonomously, by onboard computers.

Compared to manned aircraft, UAVs are often preferred for missions that are too « dull, dirty or dangerous » for humans. They originated mostly in military applications, although their use is expanding in commercial, scientific, recreational, agricultural, and other applications, such as policing and surveillance, aerial photography, agriculture and drone racing. Civilian drones now vastly outnumber military drones, with estimates of over a million sold by 2015.

The term drone, more widely used by the public, was coined in reference to the resemblance of dumb-looking navigation and loud-and-regular motor sounds of old military unmanned aircraft to the male bee. The term has encountered strong opposition from aviation professionals and government regulators.

« Worker bees can leave.
Even drones can fly away.
The Queen is their slave. »
— Chuck Palahniuk

The term unmanned aircraft system was adopted by the United States Department of Defense and the United States Federal Aviation Administration in 2005 according to their Unmanned Aircraft System Roadmap 2005–2030. The International Civil Aviation Organization and the British Civil Aviation Authority adopted this term, also used in the European Union’s Single-European-Sky  Air-Traffic-Management Research roadmap for 2020. This term emphasizes the importance of elements other than the aircraft. It includes elements such as ground control stations, data links and other support equipment. A similar term is an unmanned-aircraft vehicle system remotely piloted aerial vehicle, remotely piloted aircraft system. Many similar terms are in use.

A UAV is defined as a « powered, aerial vehicle that does not carry a human operator, uses aerodynamic forces to provide vehicle lift, can fly autonomously or be piloted remotely, can be expendable or recoverable, and can carry a lethal or nonlethal payload ». Therefore, missiles are not considered UAVs because the vehicle itself is a weapon that is not reused, though it is also unmanned and in some cases remotely guided.

The relation of UAVs to remote controlled model aircraft is unclear. UAVs may or may not include model aircraft.[citation needed] Some jurisdictions base their definition on size or weight, however, the US Federal Aviation Administration defines any unmanned flying craft as a UAV regardless of size. A radio-controlled aircraft becomes a drone with the addition of an autopilot artificial intelligence (AI), and ceases to be a drone when the AI is removed.
The earliest attempt at a powered UAV was A. M. Low’s « Aerial Target » in 1916. Nikola Tesla described a fleet of unmanned aerial combat vehicles in 1915. Advances followed during and after World War I, including the Hewitt-Sperry Automatic Airplane. The first scaled remote piloted vehicle was developed by film star and model-airplane enthusiast Reginald Denny in 1935. More emerged during World War II – used both to train antiaircraft gunners and to fly attack missions. Nazi Germany produced and used various UAV aircraft during the war. Jet engines entered service after World War II in vehicles such as the Australian GAF Jindivik, and Teledyne Ryan Firebee I of 1951, while companies like Beechcraft offered their Model 1001 for the U.S. Navy in 1955. Nevertheless, they were little more than remote-controlled airplanes until the Vietnam War.

In 1959, the U.S. Air Force, concerned about losing pilots over hostile territory, began planning for the use of unmanned aircraft.Planning intensified after the Soviet Union shot down a U-2 in 1960. Within days, a highly classified UAV program started under the code name of « Red Wagon ». The August 1964 clash in the Tonkin Gulf between naval units of the U.S. and North Vietnamese Navy initiated America’s highly classified UAVs